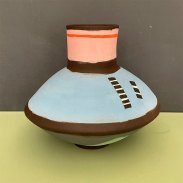 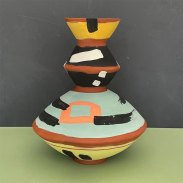 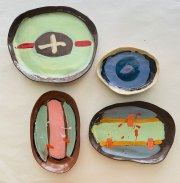 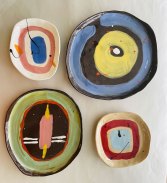 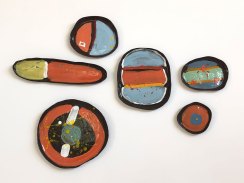 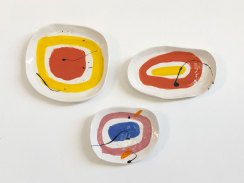 View the exhibition catalog for a complete list of items being exhibited.

The biblical seventy must surely hold metaphorical significance. My work over nearly five decades has been a search for meaning.

To quote Ernest Hemingway – ‘It is good to have an end to journey towards, but it is the journey that matters in the end.’

And as I approach what may be considered the beginning of ‘old age’ I am starting to realise that in fact, the work itself IS the meaning. It just is. And the work and the creator become one.

I have worked across the spectrum of utilitarian to decorative to architectural and sculptural ceramics.
And yet, all the previous decades of thinking, searching, and experimenting in various directions, start at this age to come together, subconsciously, letting go…

The various influences and inspirations of past years somehow have fused into a thread that I continue to follow and explore.

‘All the arts we practice are apprenticeship. The big art is our life.’ – M.C. Richards

This exhibition features ceramic vessels, installations of tiles and wall plates, and assembled totem poles which are powerful sculptural objects. Bright colours, patterns, and abstract motifs applied in an expressionistic painterly manner form the signature aesthetic of the show.

The poem Burnt Norton by T.S.Eliot resonates strongly with me with regard to my work and my life.

Time present and time past
Are both perhaps present in time future,
And time future contained in time past.
If all time is eternally present
All time is unredeemable.
What might have been is an abstraction
Remaining a perpetual possibility
Only in a world of speculation.
What might have been and what has been
Point to one end, which is always present.
Footfalls echo in the memory
Down the passage which we did not take
Towards the door we never opened
Into the rose-garden. My words echo
Thus, in your mind.
But to what purpose
Disturbing the dust on a bowl of rose-leaves
I do not know.

Clementina van der Walt was born in Johannesburg in 1952 and matriculated in 1969. After school, she went to the University of Jerusalem in Israel where she obtained a Bachelor of Arts degree in Art History.

She currently works in her own pottery studio in Woodstock, with assistants Adonis N’sele Mumpango and Euloge Think. She and her partner Albie Bailey supply upmarket galleries and stores both in South Africa and abroad. Clementina van der Walt has exhibited extensively in one-person and group shows nationally and internationally.