My work represents an ongoing dialogue between the sophistication of modern technical processes and the serendipity of centuries-old low-firing techniques.

In the early part of my career, I mainly produced functional ware for the table but during the 1990s I started focusing on low-firing techniques. Pit firing, saggar smoke firing and particularly Raku. I then started creating non-functional and decorative vessels for display.

In 2003 I obtained the degree B Tech Ceramic Design and became very interested in sculptural vessels. One of the themes I was exploring during my studies was to create woven-like pieces in clay. I also started using the “terra sigilata” technique extensively. This involves applying a very fine clay slip to the object instead of using glazes.

The wide palette of colour and design possibilities inherent to the low-fire processes has been of ongoing interest to me. Historically fireclay containers, made from heavily grogged clay, known as saggars were used to protect delicately glazed ware from fly ash that would otherwise ruin the work when fired in wood- and coal-fired kilns. By contrast, for contemporary studio potters, the use of saggars is one of inclusion, not exclusion, in that the ceramic forms are fired in a closed container to act
as a chamber to trap different atmospheric effects. By adding coarse salts, metallic oxides and sulphates to the organic smoking materials, the fuming chemicals create a diversity of colours and patterns not possible in other firing processes.

Raku or pit firing also blackens the pieces in ways that are unpredictable and uncontrollable. The desired result is of timeless mystery. 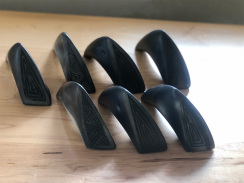 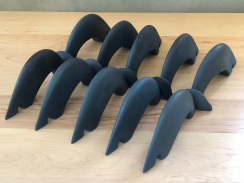 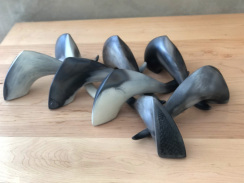