When one finds oneself in a strange space, do what you know. One step at time…one stitch after the other. The last 18 Months were out of what we know – a season apart – a space between what life was and what we cannot quite see yet how it will be after this pandemic has run its course. We don’t know what it will be …what will have changed…when it eventually will be over. But we can say we have come this far and we are still “on the road out of it” somewhere…we are definitely somewhere between the past and the future of what we considered “normal”.

Looking back on these last 18 months, which coincided with a change in my family structure – I untied the knot with my lover after 40 years – I can say they were “life-changing”. The early lockdown suited me well – I hid away and nursed my grief. Once I was over the worst sense of loss and my heart started to sprout some tender green shoots again life surfaced like through a periscope…carefully. I took notice again of what was going on around me. What was the world like after I came out of my mountain of quilts and wet tissues?

My very first walk to Muizenberg beach coincided – unbeknown to me – with a community protest against the prohibition of walking on Beaches. Police vans were parked in huge numbers along the Beachfront…megaphones ready…people crowding in a sort of socially distancing way, with surfboards and placards in between. I thought Armageddon had started while I had “moled” myself underground in my house. Only in the evening, I saw on FaceBook that this was a demonstration and not “what the world had come to” while I was isolating. What a relief!

Following the emergence of my new personal world order – once my eyes could focus again, I began to stitch. I stitched my life back together again. While writing volumes in my journals, trying to make sense of what happened…my hands supported my healing…stitch for stitch. While the world wrestled with an invisible enemy, I wrestled with my own. And while my head could not make sense of it all…my hands kept stitching…carrying me into the future. Into a time when the project would be finished, and the story rehashed so many times that the sharp edges had been rounded off…and life would continue…somehow…one stitch a time.

This work Collecting Myself was made before the pandemic and before my personal crisis, but typical of my textile work it deals with managing my life. My hands know something that the heart often doesn’t understand and the intellect is rolling around analysing from every angle…while my hands keep calmly stitching on…placating me…softly saying…”shshsh… it will be alright”.

Gina Niederhumer comes from a Family of Needlewomen in Austria. She arrived in South Africa aged 19 for a gap year and stayed. Her work deals often with what it means to live between two worlds…between north and south…between past and present.

Gina uses art to tell her story. The ‘thread-work’ becomes a literal and metaphoric means to ‘mend’ and repair her personal narrative.

Gina Niederhumer has a Masters’s degree in Fine Arts and lives and works in Cape Town. She is a full-time artist and art facilitator. Her work is exhibited widely. 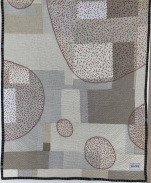 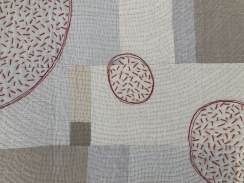 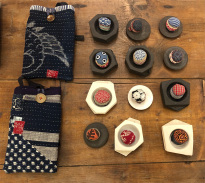